Most of us have experienced love in our lives...love from friends, family, children, pets, a spouse or partner. If we are lucky, we may find a true love relationship with our soul mate. This soul mate connection is unlike any other love we may experience...the bond seems to be instant and the ties stronger.

At 9months old, my Newfy Goliath had a passive aggressive behavior of dropping his then 90lb body to the ground in protest of anything he did not want to do...get into the car...go up stairs....you name it. So I decided to try puppy school. The first night of training we met another Newf...a female named Molly. In the past, when Goliath met other dogs, he would do his polite sniff and greet, maybe a little pup wrestling, but that was the extent of his interest. All the female dogs seemed to love my big boy, he was the stud of the neighborhood. But he didn't appear to care about them and often seemed...well...bored with them. But when he met Molly it was obviously different. He was so excited the two couldn't stay separated, they kissed each other's ears, wrestled, chased, barked, wagged and seemed to experience what I called "Puppy Love." Every week Goliath would whine for 20mins while driving to school, knowing he would be seeing Molly. He was like a teenage boy smitten by his first love. This somewhat annoying but at the same time endearing behavior continued throughout his 2 yrs of training. Over the years we continued to meet up with Molly and her owners, letting the two love birds get a chance to run and play and kiss. And whenever they saw each other it was like no time had passed, they simply picked up from where they left off. As the dogs got older, traveling in cars became too difficult, and sadly the love pair had finally become separated by distance. But even up to the last year of his life if I whispered the word Molly to Goliath he would suddenly jerk his head to look at me as if asking if we would be seeing her. Through all the years there was never another dog that received his attention and devotion like Molly. Before having Goliath, I had never thought dogs could have such clearly strong emotions for other dogs, perhaps even loving them. But after experiencing their affections for each other over the years, even up until the end, I had realized Molly was much more than puppy love, she was his true love.

So I have learned when we are lucky enough to find a true love....appreciate it. Don't let a busy life separate you...make the time to reconnect, for a little wrestling, running, or wagging. Life is just too short, not to spend it with the one you love, especially your true love. 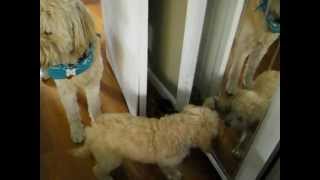